I just got back from a good week in Seattle. My plan was to visit the DSL DevCon only, but it turned out that the cheapest option was to stay from Tue, 14th until Sun, 19th. I then had time to visit both Lang.NET and DSL DevCon as well as some friends in the area. Last time in Seattle (ALT.NET Conf) I was occupied with shopping only, but this time I also had a whole day for sightseeing. It was great!

Lang.NET was all about general-purpose languages. The talks were good and I met interesting people. This two tweets from Paul Vick (VB.NET compiler in person) and Amanda Laucher (F# MVP) pretty much sum up, what I felt most of the time:

paulvick: I hope someday to be as funny as Gilad or Erik Meijer.

pandamonial: @paulvick Some day I hope to be as clever :) 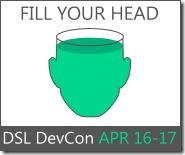 DSL DevCon (aka SellsCon) was initiated by Chris Sells. Both conferences were held in the Microsoft Research Building on their Campus in Redmond (close to Seattle).

I don’t yet know what to expect from the DSL hype. People have been doing DSLs for decades, as they did SOA. But who knows which story marketing starts telling about DSLs soon.

Still, I got my head filled up with lots of new useful information. Things I’ll have a closer look on will be Irony, F# and the Intentional Software. I’ll also follow up on all the good connections to super-interesting people. Was also nice to finally meet the Oslo guys Doug Purdy, Don Box, Chris Sells, Jeff Pinkston, Chris Anderson, Paul Vick and David Langworthy in person.

I’ll write follow-up posts about what I learned as soon as I have time for it.

I’m really tuned to see how our profession will evolve. I hope it will change dramatically. We need better processes, better integrated tools, closer communication of intentions and a significant productivity boost. I can’t believe that we will be able to create software so much faster. But, if our software wasn’t so closely tied to platforms and if it was written in a more flexible manner, so I hope, software could at least survive longer. Software is often dead born. That is, were our industry looses so much of it’s productivity.

Just my random reaction to 2009 Lang.NET Symposium – Language and Data.

As all of us know these days, Oslo is about a language, a repository and Quadrant. We all know the hard parts are the language and quadrant.

I have the gut feeling that the repository just is about the data backing for  the glue between M and Quadrant. This is the tool that has the potential to bring in money and I do understand it needs a repository.

But since PDC we have not heard anything about Quadrant, so for now all is about the language “M”. We also agree on that we won’t model customers and orders in Quadrant.

So why the heck do we still have to stand all that SQL mapping demos?

Just show us the modeling part… And show us Quadrant as soon as you’ve got something to show.