The "Oslo” team has released the third CTP of Microsoft’s forthcoming modeling platform.

Some of the  changes are:

For more detailed information check out the team announcement and the release notes. 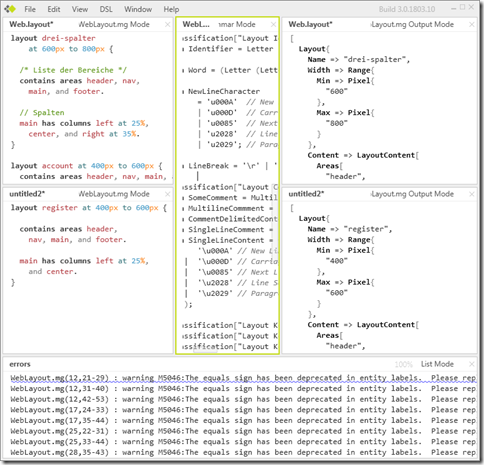 And yes, I’ll be blogging about my web-layout DSL 🙂

Just my random reaction to 2009 Lang.NET Symposium – Language and Data.

As all of us know these days, Oslo is about a language, a repository and Quadrant. We all know the hard parts are the language and quadrant.

I have the gut feeling that the repository just is about the data backing for  the glue between M and Quadrant. This is the tool that has the potential to bring in money and I do understand it needs a repository.

But since PDC we have not heard anything about Quadrant, so for now all is about the language “M”. We also agree on that we won’t model customers and orders in Quadrant.

So why the heck do we still have to stand all that SQL mapping demos?

Just show us the modeling part… And show us Quadrant as soon as you’ve got something to show.

Microsoft’s upcoming “Oslo” modeling initiative is about tools and languages. MGraph is the piece within the language “M” that defines values, while MSchema is for schemas, functions and constraints and MGrammar is for textual DSLs. “Oslo” is still CTP and it will take some time until all concepts are available for production use.

By then, Microsoft plans to publish an open specification, such that everyone who wants to can implement the “M” language. Their ambition is to make it be as broad as XML is today.

Anyone can implement it. We want this approach wide spread on a variety of different platforms. We want it to be as broad as Xml is today.

Douglas Purdy, A Lap around “Oslo”

Today we have lots of XML on the wire. There’s also lots of JSON.

I want to see MGraph get there as well.

MGraph at it’s base is not a language. It is a simple contract for storing structured data in form of a labeled directed graph. This is a set of nodes where each node has an optional label and a set of successors, each of which may be a node or any other object.

The idea behind that is, that every structure can be exposed as a MGraph just by implementing the following interface, which is the core API behind MGraph.

I added some comments for easier understanding.

As you see, even the node is not specified by an interface or a base class. Both labels and successors are extracted by the visiting graph builder.

If you want, read more about the MGraph Api here.

What I do care more about is how MGraph’s textual notation looks like and how it compares to XML.

On MSDN you can find a language specification covering MSchema and MGrammar which both use parts of MGraph, but in a slightly different manner. Microsoft definitely plans to bring those pieces together.

Today MGraph is used for values in MSchema extent initializers as well as for the AST (Abstract Syntax Tree) productions in MGrammar.

The basic syntax of MGraph very similar to JSON:

As mentioned previously a successor can be either a node or a value. A value is just written directly, while a node is split into a label followed by its comma-separated successors within curly braces.

The same data as a XML-fragment would look like this:

The next great difference is, that values are not just strings, but typed. Some of the intrinsic types are Text, Logical or Number.

Find a list of the supported types in chapter 3.5 Intrinsic Types in the “Oslo” Modeling Language Specification.

While XML-elements and attributes are restricted to QName, a label in MGraph can be any object. They way how this is expressed in the textual syntax is not finished yet, but in MGrammar productions more complex strings are defined with an id-function.

In order to make a mapping to relational structures easier, successors are not sorted by default. In order to sort the successors, they have to be encapsulated in an integer-labeled node.

Which alternatively also can be expressed by brackets instead of braces. In the “M” jargon this is called a sequence.

A named value in MGraph is just a labeled node with a single value successor. The equals-sign is just some syntactic sugar for better read- and writability. In the “M” jargon this is called Entity, but this name is subject to change. Record structure might be a better name.

XML is great. Mostly because it can be read by almost every system, not because it has such a nice syntax. It was never meant for the purpose it is used for today either. It is a markup language for defining additional metadata onto text.

But what XML is broadly used for today, is configuration files, transport messages and even internal DSLs. For this kind of information, that has more structuring elements than data, XML is way to verbose.

Therefore I think MGraph with its tight syntax has the potential to become a great and broad alternative.

What do you think?